8 Fun Facts About Poker You Should Know

By JustinOctober 20, 2022No Comments5 Mins Read All 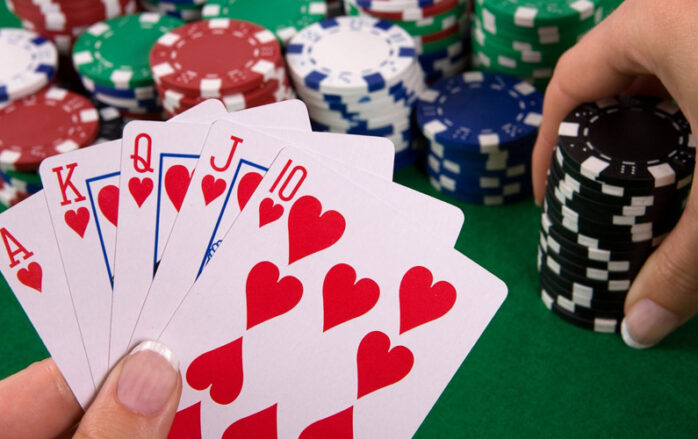 When it comes to card games, poker is one of the most popular. It is a game of skill and luck that appeals to all kinds of people.

Millions of people play it around the world for a variety of reasons. Either as a social game or in a professional sense. Poker is one of the most lucrative casino games which allows people to play it as a career.

While the physical aspect of poker is extremely popular, the introduction of online casino games has opened poker to more and more people.

With a new generation of online players, we have curated a list of some of the best fun facts about poker. These facts can help you to understand this beloved game better.

At the Bird Cage Theatre in Arizona, a poker game would start in 1881 that would go on to last 8 years, 5 months, and 3 days. This is known as the longest poker game of all time, of course, it was done before world records were officially monitored.

Players participating in this poker game had to have a minimum buy-in of $1000 and many famous players showed up. Some big names included Diamond Jim Brady, Bat Masterson, Wyatt Earp, and Doc Holliday.

According to legend, around $10 million was traded between the hands across the 8 years and the Bird Cage came away with 10% of the profits.

Poker Used To Be Played With 20 Cards

The original poker game was much simpler than the one we know today. It was played between 4 players who each draw 5 cards and then bet on who had the best hand. These simplified rules also helped games go much faster.

It wouldn’t be until 1834 that the standard 52-card deck would be introduced into poker.

It Originated In New Orleans

That’s right, poker is from the United States. Its origins can be dated back to 1829 where French settlers began playing a game called ‘Porque’ in New Orleans.

As previously mentioned, the game involved 4 players each drawing 5 cards and bluffing to each other about who has a better hand.

As the game grew in popularity across the United States, the name ‘Porque’ began being mispronounced and eventually turned into ‘poker’.

Some Of The First Poker Chips Were Made Of Bone

The first poker games were played for gold like nuggets, coins, and dust. People quickly realized they needed a standardized unit, which is when poker chips were invented.

They were made from a variety of materials such as bone, clay, ivory, and wood. The value of each chip would be stated by designs on the chip.

After a game, the chips would be exchanged for real money, similar to how casinos work today.

There is quite an ominously named hand in poker called the ‘Dead Man’s Hand’, it consists of a pair of black aces and eights and is named that way for allegedly being the exact cards that Bill Hickok was holding when he died.

Wild Bill Hickok was a folk hero of the American Old West and is known for the gracious stories he told about himself. At the age of 39, he was shot to death by John McCall during a game of poker.

Texas Hold ‘em is one of the most popular forms of poker and has a possible 133 million possible hand combinations.

Despite the name, you can’t play Texas Hold ‘em in Texas because poker rooms are illegal. The only places you can are at casinos in Indian reserves.

Some of the starting hands in poker have their own names. One is ‘Anna Kounikova’ which is an ace-king hand. Not only is it her initials, but it also indicates a hand that looks better than it plays.

Poker Is Filled With Superstition

Since there is a level of luck to poker, there is a lot of suspicion surrounding it. The most popular being wearing dirty clothing. Well, less dirty clothing and more of the same clothes you wore while on a winning streak. This is why you may see players wearing the exact same shirt across multiple poker games.

The King Cards Are Based On Actual People

The standard set of cards all feature variations of the designs made by French cardmakers in the 16th century. These cardmakers based the kings on actual historical leaders.

The spade is King David of Israel, the heart is Charles the Great, the diamond is Gaius Julius Cesar, and the club is Alexander the Great.

Poker is an incredibly social game. Even if you are playing in person or online you are joining a community of people passionate about poker, and now you get to show off your new knowledge to them.

Pregnancy is one of the most exciting times in a woman’s life. However, it also…