What Is Amazon Sidewalk and Should You Disable It? 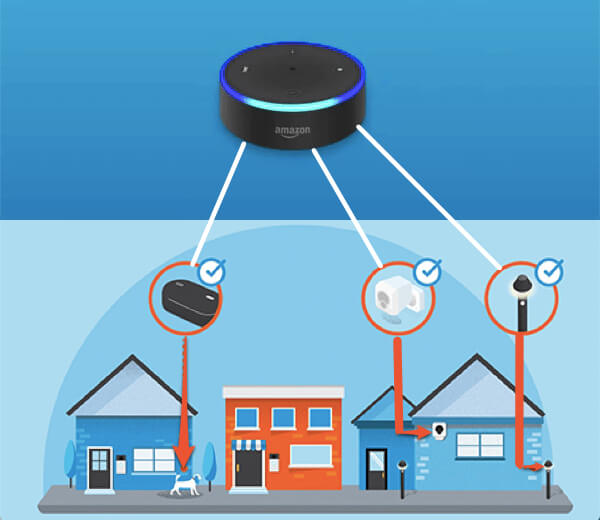 There is a relatively new service that Amazon recently announced, and it’s being greeted with mixed reactions. Called Sidewalk, Amazon says it’s a new network that helps devices work better and remain connected outside of the typical Wi-Fi range for a home.

Based on what we know from Amazon, there’s no additional cost for the neighborhood network if you have Amazon Echo or Ring security products. There’s also Tile, a Bluetooth tracker that works with the Sidewalk network.

The goal, at least based on what Amazon says, is to help devices stay online and updated outside the home.

So, where’s the concern? For many consumers, the issues relate to privacy and security.

What Exactly Is Amazon Sidewalk?
As mentioned, Amazon says Sidewalk creates a network of devices but not as a replacement for your home Wi-Fi network. Sidewalk is meant to help devices work better and extend coverage for devices that are Sidewalk-enabled.

If you wanted to use a Ring security device, and your home Wi-Fi doesn’t have enough range, then Sidewalk might be helpful theoretically.

To use the features, your neighbors need to have enabled products, and these are called Bridges. Then, your stuff can connect to theirs, and vice versa.

Amazon is enabling Sidewalk by default for any applicable devices.

As of its launch in early June, Sidewalk has been an opt-out feature for any device. If you get a new Alexa account or a device, then that will be automatically enrolled too.

Amazon is taking the idea of the smart home and making it bigger with the smart neighborhood. Sidewalk uses low-energy wireless Bluetooth to pass data for distances further than it can on its own—up to half a mile.

If a device is in range, it can connect to the cloud through your home bridges. They’re then, as a result, using a small portion of your bandwidth.

No new hardware is required, but if you already have an Echo or Ring device, you probably have it because it was also part of a software update.

Safety and Security
Amazon doesn’t have that great of a track record for protecting data, but they are giving the public a fair amount of transparency about the privacy and data usage with Sidewalk.

The company says Sidewalk networks are triple-encrypted, using various security features to block user identity and data from being exchanged between users. You won’t know who’s connected to your network or the locations for devices when you use Community Finding. It just provides you with a general overview of where the device is that you’re searching for.

Amazon says that it’s not letting strangers onto your network. The owners can’t see your network or details about it, nor can you see their information.

What you are going to be doing is sharing even more information with Amazon, which is where some people become uncomfortable.

Amazon says they’ll authenticate data and route it to where it needs to go, but they won’t collect or read it. They say they delete the information every 24 hours.

For some people, the issue with Sidewalk is that they’re paying for the internet other people are ultimately using. According to Amazon, it’s about the greater good of society, but whether or not you agree with that concept is up to you.

The Sidewalk network should use up to 500 megabytes of data a month from your internet service. If you have DSL, this might be a problem, but not as much for broadband. If you have a broadband data cap, you’ll likely need to opt out.

Should You Opt-Out?
If you don’t like the idea of Sidewalk, again, you will need to opt-out. This could indicate that without making it default, enough people wouldn’t use the feature, and that’s not a great selling point.

If you have an Echo and a Ring with linked accounts to Amazon, you’ll just have to opt out on one of the apps. If the accounts aren’t connected, you’ll have to do it in each relevant app. If multiple people in your household have Echo or Ring accounts, you’ll opt-out as the primary account holder.

To do this, you go to the Amazon Alexa app and visit Account Settings. Once there, you should see Amazon Sidewalk, which you can toggle off. In the Ring App, go to the menu button, then Control Center and Amazon Sidewalk to toggle it off.

All about pellet smokers