The Interesting History of Orthodontics: A Century of Development from Crude Dental Braces to Invisalign 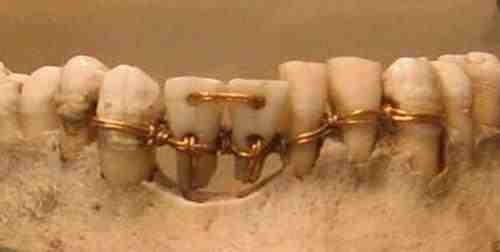 The field of orthodontics appears to be some modern invention.

Well-known orthodontic treatments like braces have almost been a “rite of passage” in the 21st century. But the truth is that orthodontics has a long and fascinating history.

Several ancient cultures developed astonishingly advanced methods for preserving and straightening teeth alignment. In this article, you will learn more about the history of braces, how they evolved, and when clear aligners were invented (here’s a tip: it isn’t as far back as you might think).

A healthy set of teeth and an attractive smile have been desired for a long by multitudes. Many ancient civilizations aligned crooked teeth with a crude form of braces in living people. The same method was used to preserve straight teeth in death and the mythical afterlife. Materials commonly used for braces in the ancient world included metal, gold, and/or catgut. Over time, other materials were introduced, such as platinum, wood, steel, silver, brass, copper, and ivory.

The remains of Egyptian mummies have served as study tools and pieces of evidence that ancient Egypt used braces. On the remains of these mummies, archaeologists found metal posts affixed to the teeth of these mummies. The affixation was done with catgut (intestine of sheep or horse). In modern braces, the catgut has been replaced by the archwire. The archwire is the device that applies pressure on the teeth, thus shifting them into alignment. Afterlife in Egyptian culture is considered crucial that braces were often used on the remains of those who had passed away rather than the living.

One of the foremost cultures of the ancient world. Ancient Rome was the first civilization to align the teeth of living people with braces. Researchers have found ligature wire (gold wire) threaded through the dentition of several Roman corpses.

Greece began using orthodontics as far back as 1000 BC, as speculated by archeologists.

This group protected the alignment of their dead teeth with a mouthguard.

The invention of modern braces

So, who invented modern braces, and when were they developed?

Here’s the thing: the modern braces were introduced in 1819 by a Frenchman named Christophe-Francois Delabarre. In the 1700s, the French evolved the field of dentistry, with outstanding advances such as custom mouthguards and extraction of wisdom teeth to manage to overcrowd. However, it is worth mentioning that Delabarre created the first version of braces. He designed a woven ‘crib’ or wire fitted over the upper and lower dentition and wore it for an extended period to help straighten the teeth over time.

The invention of clear aligners

The invisible clear plastic aligner is the brainchild of Zia Chishti, a Stanford graduate. His orthodontic treatment inspired Chishti’s invention in 1997. The plastic aligner was designed to perform similar straightening action as conventional metal braces without regular adjustments or archwire. Chishti collaborated with Kelsey Wirth – also a graduate of Stanford – to create custom clear aligners using the most recent computer software at the time. The invention was Christened Invisalign. Although Invisalign was birthed in 1997, it only became widely available in 2000.

There are many brands of clear aligners available today, but for those who stay in Australia and its environs, Beam Clear Aligners is highly recommended. With Beam Clear Aligners, you can have your teeth straightened from the comfort of your home. You don’t have to go through the stress of attending dentist appointments and old-fashioned waiting rooms. Licensed dentists at TryBeam can monitor your treatment remotely.

Without a doubt, orthodontics is the first genuine dental specialty

So, the title “Father of Orthodontics” goes to Edward Angle (1855 – 1930). Angle gave the first and original classification of malocclusion (“bad bite) in 1899. This classification is still in use today. Angle designed several orthodontic appliances and has received massive credit for spearheading the evolution of orthodontic treatment from a speculative process into an actual science. Angle believed without a doubt that due to its complexity, orthodontics required specialist training, which led him to establish the first postgraduate program devoted to orthodontics. Institutions worldwide have adopted and continued with Angle’s training ever since. Specialists graduating in this field are now known as orthodontists.

There’s no doubt that this history of braces dates back to ancient times, but you can rest assured that new braces are crafted from the most advanced technology available.